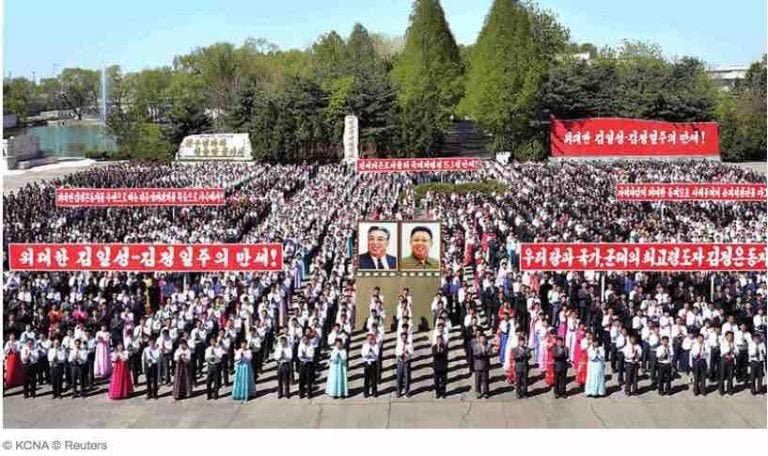 And they are right! That’s why nations who do not accept the USA and NATO dictatorship neo-colonialism and imperialism like Venezuela, Bolivia, and African nations should increase their military forces including nuclear weapons. Nuclear dissuasion must not be the privilege of white superpowers. It’s the way to avoid wars. And finally, everybody (EVERYBODY) will be forced to disarm.

Pyongyang is not a threat. They have no territorial ambitions. Its priority is survival and independence, and that has always driven the North Korean nuclear program, Dan Glazebrook, political writer, told RT. John Bosnitch also joins the discussion.

Russia and China offered their solution to the crisis calling it the ‘Double Freeze’ initiative.

It calls for North Korea to stop its nuclear and ballistic missile testing. In return, the US and South Korea would halt their joint exercises near North Korea.

However, the US dismissed the proposal.

RT:  How much of a threat does North Korea really represent to the US? Presumably if left alone, would it attack any other state?

Dan Glazebrook: No, I don’t think they are a threat. They clearly are not a threat. They have no territorial ambitions. Simply their priority is survival and independence, and that is what has always driven the North Korean nuclear program. As they have pointed out, they have seen what happened to Iraq after Iraq allowed itself to be disarmed by the UN. They saw what happened to Libya after Libya gave up its nuclear program. They are determined to avoid the same fate. They also remember what happened to them during the Korean War, when over three million people were killed in that war. More towns and cities were destroyed by US bombing in North Korea during the Korean War than in the whole of Japan or Germany during WWII. In fact, the US dropped more bombs on North Korea in the Korea War, than it dropped in the entire Pacific theater during WWII.

So Britain and the US may have wiped this from their historical memory, but the Korean certainly haven’t. There are a large number of Koreans alive today who lived through that. They are determined to make sure that nothing like that happens again. And it is working because the US is backing off. Where is Trump’s “fire and fury” now? The best he seems to be able to do is to say that he is considering trade restrictions. He is looking like an irate clown, who’s just discovered that his flower won’t squirt. Even Nikki Haley – you know her belligerent sounding comments that North Korea is “begging for war.” That sounds to me like they [US] are setting themselves up for a huge climb down by saying North Korea is begging for war. Therefore we are not going to give it to them. The truth is: they have realized that their bluff is being called – they are not able to do anything about Korea. And the whole world is learning a very valuable lesson by comparing the fate of North Korea, which has its nuclear weapons program, and countries like Iraq and Libya, which gave it up…Kim Jong-un is not being paranoid. He is basing his policy on a very concrete, realistic analysis of the history of his own country, and the history of other countries who have been on the US hit list.

RT: Do you think the US should tolerate a nuclear-armed North Korea?

DG: Yes, absolutely. The US and Britain have no stomach for wars where they might actually have any real repercussions. They only like to fight wars with impunity. They like to fight wars. Look at Iraq in 2003. They spent 12 years systematically disarming that country before they felt prepared to take on; Libya – they persuaded to give up its nuclear weapons program and so on. They don’t have the stomach for this kind of fight. They simulate these kinds of wars year in and year out with North Korea, and they always conclude that the casualties will be too great. And that was before there was even a nuclear weapon. There is no way they would have the stomach for that kind of fight.

RT: Do you think the US is right to impose this ‘Double Freeze’ solution put forward by Russia and China?

John Bosnitch: I think that a normal fair-minded person would ask why the US is opposed to that solution in honesty. The US already has intercontinental ballistic missiles pointed not only at North Korea but at dozens of countries around the world. When North Korea says that it wants to exercise a policy of “peace through strength” – that is not a translation from the original Korean – that it is the original talk coming out of Washington some fifty years ago. When North Korea is just copying Washington’s policy of peace through strength, I find it very difficult to understand the US response.

RT: Nikki Haley said that North Korea is “begging for war.” Is that a strange choice of language to use?

JB:”Begging for war” is the kind of phrase you hear the schoolyard bully using. I heard it in my youth and “you’re begging for a fight,” and so on. I don’t think that is the correct language to use if you’re attempted to achieve a diplomatic solution with respect to North Korea. Once again, we do have saber-rattling on both sides. Most people need to remember one very, very important thing: saber-rattling only makes a big, big noise when the saber stays inside the scabbard. And that is what is happening here: nobody is shooting anybody, nobody is launching any missiles at anyone. What we’re seeing is the setting of the stage for negotiations.