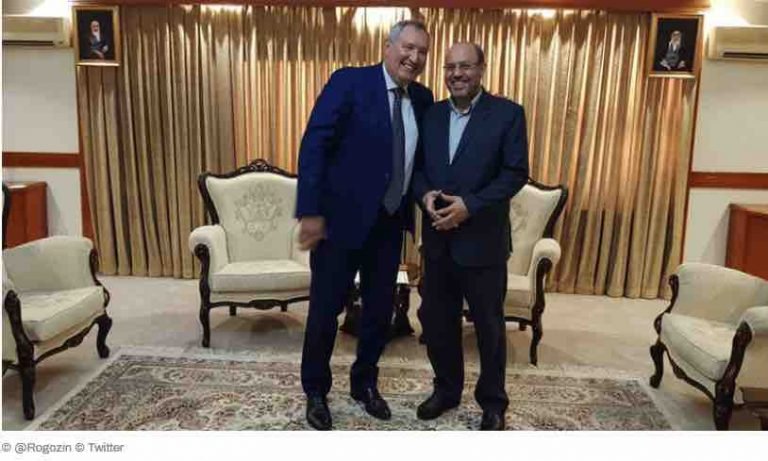 The US is doing a great job of solidifying the anti-US imperialism alliance.

Moscow and Tehran have agreed to strengthen military and technological cooperation as the Russian Deputy PM visited Iran following the latest round of US sanctions.

Russian Deputy Prime Minister Dmitry Rogozin has met Iranian government officials during his visit to the country on Saturday. Rogozin leads the Russian delegation invited to the inauguration ceremony of Iranian President Hassan Rouhani, who was reelected in May.

The move comes just three days after the US decision to impose a new round of sanctions against Russia and Iran, along with North Korea. The ‘Countering America’s Adversaries Through Sanctions Act’ was overwhelmingly approved by American lawmakers at the end of July and signed by Trump on Wednesday. The US leader himself said that the “legislation is significantly flawed” and warned that it puts “US-Russia relations at all-time & dangerous low.”

The move triggered a strong response from all subjects of the newly introduced economic restrictions, as well as concerns from the US’ European allies.

Moscow considers the bill “a full-fledged economic war on Russia,” according to Russian Prime Minister Dmitry Medvedev. He also called the legislation a “humiliating defeat” for Trump, which leaves no room for improving bilateral ties.

Russia promised retaliatory measures even before the bill was officially signed by Trump. Following congressional approval, Russia decided to reduce the number of US diplomatic staff in Russia to 455, and suspend the use of embassy storage facilities, warning that more restrictions may come.

Iran slammed the measures as a violation of the 2015 nuclear deal, promising to “show an appropriate and proportional reaction” to America’s “hostile” act. Tehran also blamed Washington for attempting to curb foreign investment in the Iranian economy.

Several European government officials said the US law would harm their national interests, as the restrictive measures would target European companies taking part in Russian-EU energy projects, including the Nordstream II pipeline.

German Foreign Minister Sigmar Gabriel criticized the restrictive measures as “diametrically opposed to the interests of Germany and the EU.” Earlier, German Economy Minister Brigitte Zypries called on the European Commission “to look into countermeasures” against the “illegal” sanctions.

The Austrian chancellor also slammed the move, calling it “absolutely unacceptable.” France voiced its opposition to the sanctions, saying they target companies beyond US jurisdiction and violate international law.

The EU vowed to defend its economic interests and issue an “adequate” response if the sanctions on Russia hurt the interests of European companies working with Russia, according to European Commission head Jean-Claude Juncker.