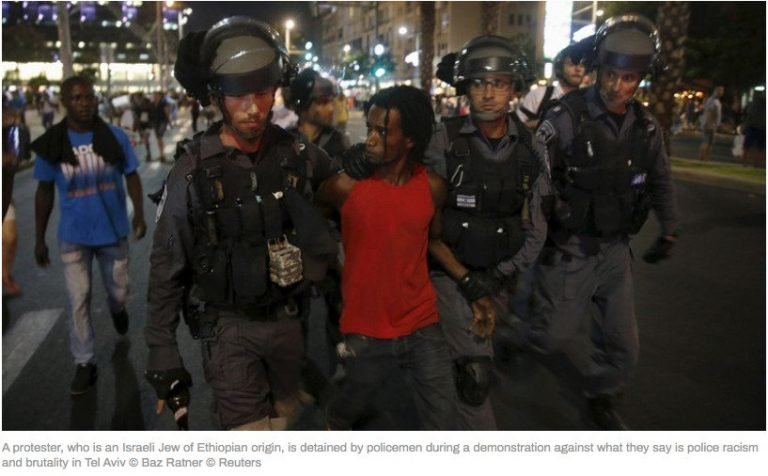 Israel racist police chief says, “Immigrants are invariably more involved in crime than others”… forgetting that 80% of “white” Israelis are immigrants from eastern Europe… who are in fact not real Jews but come from Khazar while the black Jews from Ethiopia and the Palestinians are… proving that Israel is not only a colonial state but also a racist white supremacist one.

Israel’s police chief has said it is “natural” for his officers to treat Arabs and Israelis of Ethiopian descent as potential criminals, adding that his controversial claim is backed up by studies on crime rates among immigrants “the world over.”

“When a police officer comes across a suspicious person, his brain suspects him more than if [the suspect] were someone else, it’s natural,” Police Commissioner Roni Alsheich told a gathering of the Israel Bar Association on Tuesday, according to the Times of Israel.

He added that “over-policing is natural” as well when it comes to Ethiopians, responding to a question about persistent accusations of police brutality and racial discrimination against Ethiopian Jews.

The police chief indicated he also meant Arab Israelis and East Jerusalem Palestinians who come into contact with Israeli officers.

“Studies the world over, without exception, have shown that immigrants are invariably more involved in crime than others, and this should not come as a surprise.”

Israeli police have long been accused of brutality and use of excessive force against Ethiopian Jews.

In February, member of the Knesset Karin Elharar said that “police violence against Israelis of Ethiopian descent has become a major problem, and it cannot be treated with a Band-Aid,” as cited by the parliament’s official website.

The statement was made after the Justice Ministry’s Police Investigation Unit, an external body in charge of investigating police misconduct, decided not to take action against two officers who used a stun gun to subdue Ethiopian-Israeli Yosef Salamsa in April 2014.

In April last year, the Israeli-Ethiopian community staged a series of massive rallies across the country after a seemingly unprovoked police assault on an Ethiopian-Israeli soldier was caught on camera.

Gadi Yibarkan, one of the leading activists behind the 2015 rallies, said on Tuesday that the police chief was “not particularly smart for openly saying that Israel was a racist country,” according to the newspaper.

“We are not migrant workers, we are Jews who returned to their country after some 2,500 years in exile,” he stressed, adding that Alsheich’s statement explains why “police officers deal violently with black people and Arabs.”

Alsheich’s remarks also provoked a wave of indignation among both Jewish and Arab-Israeli politicians.

“Not only is the commissioner failing to deal with police violence toward the Ethiopian community, he is encouraging it,” Merav Michaeli, an MP from the Zionist Union, said. She added that “young Ethiopian immigrants are not ‘migrants,’ they are Israeli in every way, and these type of comments are anything but ‘natural,’” as reported by the Times of Israel.

Michal Rozin, an MP from Meretz, called for the establishment of mandatory racism workshops for all police officers in the view of the situation.

Ayman Odeh, the head of the Joint Arab List faction, denounced Alsheich’s comments as “racist and discriminatory” and stressed that the job of the commissioner is “to serve and provide security for all Israeli citizens, not just white Jews.”

At the same time, Public Security Minister Gilad Erdan expressed support for Alsheich and said that the commissioner did not actually justify “over-policing.”“He [Alsheich] said, bravely, that there was a problem and that the police was addressing it,” Erdan said, adding that in his comments the commissioner “simply described the thought-process of police officers that has in the past led them to react wrongly.”

Meanwhile, public dissatisfaction with police continues to rise, reaching 84 percent in recent weeks, according to Israel’s Channel 2 News. According to a June poll cited by the newspaper, 84 percent of Israelis view the police “as corrupt, with officials unfit for various reasons.”