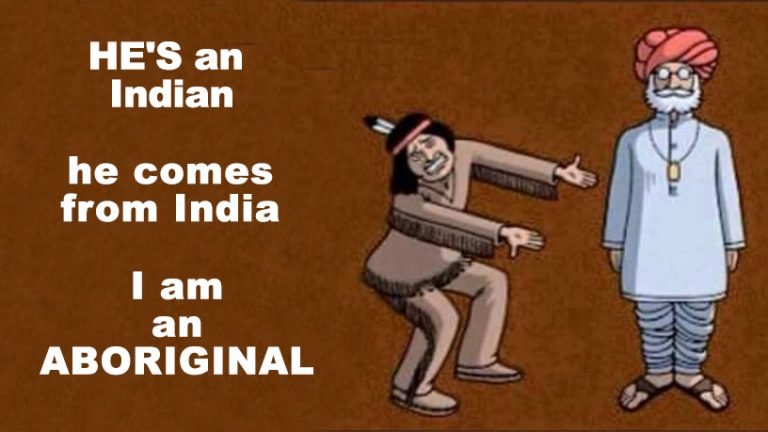 The stupidity of the European colonizers, believing they arrived in India by heading west… But the most stupid ones are the Americans who knowing very well that it’s not India, continue to call the indigenous people “Indians”…. More idiotic: impossible.

Europeans at the time of Christopher Columbus’s voyage often referred to all of South and East Asia as “India” or “the Indias/Indies”, sometimes dividing the area into “Greater India”, “Middle India”, and “Lesser India”. The oldest surviving terrestrial globe, by Martin Behaim in 1492 (before Columbus’ voyage), labels the entire Asian subcontinent region as “India”, named ultimately after the Indus River.

Columbus carried a passport in Latin from the Spanish monarchs that dispatched him ad partes Indie (“toward the regions of India”) on their behalf. When he landed in the Antilles, Columbus referred to the resident peoples he encountered there as “Indians”, reflecting his purported belief that he had reached the Indian Ocean. The name was adopted by other Spanish and ultimately other Europeans; for centuries the native people of the Americas were collectively called “Indians” in various European languages. This misnomer was perpetuated in place naming; the islands of the Caribbean were named, and are still known as, the West Indies.

As European colonists began to settle in the Americas in the 16th and 17th centuries, and have more sustained contact with the resident peoples, they understood that the residents were not a homogeneous group sharing a unified culture and government, but discrete societies with their own distinct languages and social systems. Early historical accounts show that some colonists, including Jesuit missionaries in New France, attempted to learn and record the autonyms of these individual groups, but the use of the general term “Indian” persisted.